Here are the deal boys and girls, so listen up.

You’re on a planet, Natrolis, and it is populated by a bunch of primitive reptilian warriors and spell-casters.

It has just been invaded by humans, because, um? that’s what humans do.

Complicating matters is an ancient insect race that has just woken up within the planet and is itching to eat everybody.

This is about as deep as the story gets in Dark Planet: Battle for Natrolis, so if you don’t like to read or be drawn in by a gripping narrative, your game has arrived.

But seriously, many games without a story have gone on to be great experiences.

So, in a flooded real-time strategy market, with heavyweights like Warcraft 3 out there and less popular but still quality titles like Battlecry 2, should anyone plunk their money down for yet another iteration of gather, build, destroy gameplay?

Read on my RTS devotees.

The three races I mentioned above-Sorin, Human, and Dreil respectively-are the race players that will lead to global domination.

Gameplay is by-the-books RTS, though there are some small innovations I will mention.

The campaigns, one for each race, consisting of a few tutorials to get you started and then a string of scenarios with varied objectives.

Though there are three campaigns, each uses the same maps, so there is a lot of repetition if you simply must beat the campaign with each race.

It would have been nice to have an in-depth storyline experienced differently by each race.

It would also be nice if I won the New Jersey Big Game Lottery, so let’s work with what we have.

In the spirit of gathering resources that make no sense (Enemy Nations is the only RTS I know of that actually makes players refine coal and iron into steel-that makes sense), there are three that each race must acquire.

Humans need crystal, gas, and stone, Sorin’s need, wood, stone, and faith (acquired by praying at a temple), and the Dreil, being nasty insects, have to acquire wood, crystal, and cocoons, left behind after killing enemy units or neutral creatures roaming the maps.

As you can see, the three races couldn’t be more different, and this translates well into the combat aspects of the game. 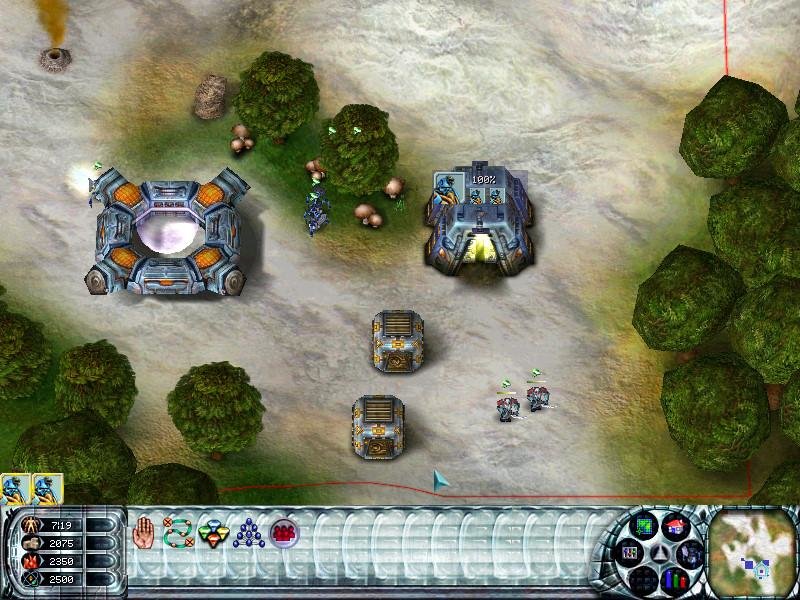 The roster of units and upgrades for each race is pretty impressive and really distinguishes each one.

The Sorins have a nice lineup of lizard units to train, including Archers, Stompers (Hulk smash!), Dragons, or Zeppelins.

Their Priests are able to use a variety of spells to do everything from making the trees grow faster-such conservationists!-to calling down a rain of fire or undead army on the enemy.

The Dreil can breed a ton of huge bugs like the Mantis, Spitter, Winger, or Kamibees that can go on suicide runs.

In order to accommodate their need for fresh cocoons, there are a few different units that can collect them, including a giant worm that burrows beneath the ground.

The Human colonists are the most familiar, sporting Marines, Flame-Thrower troops, Jet Bombers, and mechs like the missile-wielding Koot.

Thankfully, each one of these units and weapons looks fantastic.

Dark Planet runs on a 3D engine that is at times stunningly beautiful.

With the mouse or keyboard, you can quickly zoom in and out and rotate at will.

Zooming in allows you to admire the detail in each unit and building.

The animation is smooth, and the effects, such as spells and explosions, are a joy to look at.

Even the way the units die, with the souls of troops killed by the Sorin leaving the body or the Dreil exploding into a goopy mess, is intricate and eye-catching.

I was enthralled just by watching Sappers (human resource gatherers) call in a floating craft that beams down new buildings.

The engine also sports some nice lighting effects, and the battlefield can suddenly and rapidly turn a multitude of colors as missiles explode, spells are unleashed, or blood spills over the ground.

At times this literal rainbow of colors can distract more than entertain, but these instances are rare.

The sounds don’t fare as well.

Explosions, gunshots, and screams are in abundance to be sure, but the units lack real personality.

Why can’t I hear a few quips from marines as I order them about?

Natrolis is a pretty lonely place for a commander.

The interface tries to be more streamlined by containing everything on a bottom toolbar.

The problem with this is that the icons for different functions like building and researching upgrades are all on one line with no text description.

When you hold the mouse over an icon, a text description lines the top of the screen.

Not the biggest inconvenience, but it can be distracting to look up to read it when you’re trying to build up quickly.

Of course, this problem is alleviated after extended play when you memorize the icons.

One convenient feature is that when you go to build a unit or construct a building, the amount of each resource needed is displayed right next to your current stockpile.

This allows you to quickly assess and adjust your resource gathering.

There were a couple of interface quirks that shipped with the game, such as the camera immediately jumping to a selected group of units.

This made assaults consisting of multiple groups a chore, as you constantly had to scroll back to a waypoint after selecting each group.

This was quickly fixed with the first patch.

I’m hoping a second patch is released to fix the broken skirmish mode.

There is a nice selection of maps, but the AI is out of whack.

I was surprised at this, being that both the friendly and enemy AI in the campaign is pretty strong.

In skirmish mode, if you set the enemy AI to easy or medium, it is an absolute pushover.

If I tied a mouse to a squirming fish, the fish would dominate.

Put the AI on hard, however, and you are bombarded by the AI with a constant stream of units that doesn’t let up.

A balance has obviously not been achieved.

There is hardly anyone there, however, so if you don’t have friends willing to buy and play the game with you, you’re out of luck.

While many elements of Dark Planet are derivative and some are simply missing, I found myself enjoying the game at times.

At this point, it doesn’t have a lot of longevity due to frustrating skirmish AI and a repetitive campaign, but I would welcome a sequel that could remedy these shortcomings.

There are indeed elements that are simply fantastic, such as the graphics and unit variety, but this first outing to Natrolis simply does not hold up against other selections in the genre.

If you have an RTS obsession, or have already gobbled up other strategy games and are itching for something new, you might want to give the demo a shot.

It is both a compliment and a criticism, however, to say that I was left hungry for more.…