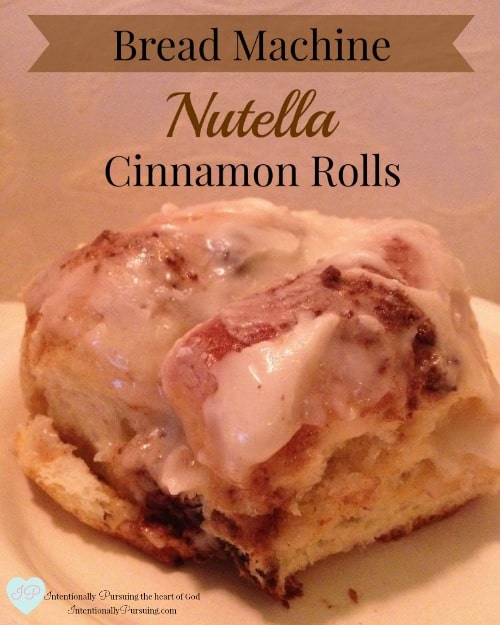 Happy Friday!  Do you know what’s this weekend?  Daylight saving time!  This is good news for food bloggers throughout the world.  Extra light at night for taking food pictures!  Hooray!  I’ve been having to take some of my food pictures in the mornings before I go to work, and the light is awful – especially if it’s cloudy and raining.

I don’t know.  It makes me really happy; I’m in such a good mood!  I don’t know what’s with me.  It might be because I just ate a couple of cookies.  Cookies just make me joyous.

It’s almost springtime, love is in the air, my hair is extra soft, the new Andrew Bird album is amazing, I love my family, Mad Men is coming back on soon, and these Nutella cinnamon rolls are delicious.

I really have a thing for Nutella.  Doesn’t everyone?  That is, if you’ve tried it.  Once you try it, you get hooked.  I used the last of my Nutella in these cinnamon rolls.  Afterwards I scraped the last of the Nutella schmears out of the jar with my finger and devoured them.  I looked pathetic.  I don’t know what I would have done if someone walked in the kitchen right then.  I’d probably growl at them.

I “made” the roll dough in my bread machine.  The dough could be used for bread, sticky buns or donuts, too.  It’s moist, buttery, light and fluffy.  The secret ingredient is unusual – mashed potato.  I’ve been using mashed potatoes in my breads recently, and I’m telling you, it’s what makes the dough.  You can’t taste potato in the dough, so don’t worry.

Using a bread machine makes this recipe unbelievably easy, and if you have one in your possession, you must bake these.  After the machine does all of the hard work, and the dough has risen, you roll out the dough and slather it in butter, brown sugar, cinnamon and Nutella.  After rolling up, slicing, and allowing to rise again, the rolls are ready for baking.

The rolls are glazed with a mixture of Nutella, confectioners’ sugar and milk. You get twice the amount of Nutella in this recipe compared to other Nutella recipes on the interwebs.

Also, this recipes makes two pans of cinnamon rolls – not one.  That shouldn’t be a problem.

To make the glaze, in a small bowl, whisk together remaining 1/4 cup Nutella, confectioners' sugar and milk until well combined and smooth.  Drizzle glaze over cinnamon rolls.